The process of making breakfast for my wife Una started six-and-a-half years ago.

We had just started dating, and were mutually doing that thing many new couples in the digital age do: Clandestinely poring over one another’s social media presence. She caught me accidentally favoriting an old tweet of hers; I raised an eyebrow when she asked about people in a several-years-old photo.

It was on Una’s otherwise mostly-spare Facebook page that I found a link to a YouTube channel called “The Adelaida Show,” which had only one video, titled “Avena.” I clicked through to find Una’s grandmother, Adelaida, tentative in front of the camera at first but a welcoming smile slowly moving across her face as she announced the task, to make avena, or oatmeal, for her beautiful granddaughter.

Gentle, plinking acoustic guitar music swelled as Adelaida headed to the stove and into her culinary groove while her little black-and-white dog, Scarlett, stood watch, waiting for morsels. The kitchen was cluttered—condiment bottles off to the side, piles in the corner, cabinets open—but there was something about the video that instantly made me feel at ease, like I was in my own grandmother’s kitchen if either of my beloved late grandmothers had been revered for their cooking.

And maybe that’s part of the reason I was instantly drawn to Adelaida and to the video—precisely because it was so different from my own experiences. Most of my favorite food-related memories of my own late grandmothers involve a restaurant—piles of Old Bay–peppered crabs on butcher paper in Delaware; sampling dim sum in Chicago’s Chinatown. My aunts recently told a story about my father, as a boy, being able to make himself ill on cue during dinner to skip the lima beans and retreat to the living room and watch the Mickey Mouse Club. My mom’s mom shared her love of books; my dad’s mom an incredible gift for music, and Una’s video with Adelaida made me think of the way they generously shared those passions with us and made me appreciate and long for them too.

Adelaida’s avena has just four ingredients: Oats (Quaker), sweetened condensed milk (Eagle Brand), cinnamon (don’t be shy) and water. Nothing is measured precisely; Adelaida couldn’t find the measuring cups so the oats were dumped into the pot with a coffee mug. As she stirred the concoction on the stove, she regaled Una with tales from her childhood: “When you were a little girl, your mother, she called me to ask, ‘How do you make the eggs for the girls? They don’t like my eggs.’” I could hear the woman I love, who was mostly invisible throughout this process, keeping the focus on Adelaida, laughing warmly in the background.

Now more than 37,000 people have watched my wife’s grandmother make oatmeal on the Internet, many commenting sweetly that she reminds them of their own grandmothers. It is still the bulk of what I know and love of her, other than the traces of her in my wife and in-laws. I still want to fight the 19 people who thumbs-downed the video. How dare you. You monsters.

The first time I met Adelaida was at her wake. I had never experienced Catholic funerary customs before, and hers was the first corpse I ever saw. It rattled me, how different she looked now from the smiling woman I knew from the video, rosary tangled in bony fingers. Chills, then a small heartbreak, when Una kissed her goodbye.

I keep my grandmothers alive by reading, by noticing blooming flowers, by singing Rodgers & Hammerstein songs in the shower. Instead of learning through YouTube, Una has introduced me to Adelaida’s recipes hands-on, as we assembly-line dredging tortillas in her homemade chili sauce for enchiladas, massage mountains of masa into a workable paste with her mother and aunt and sister every year around Christmas, watch “The Muppet Christmas Carol” while we wait for the tamales to steam. The hours of intensive tamale craftsmanship lead to an outpouring of stories, tales of Una and her sister as children, of her mother and grandmother straddling lives in Durango and Chicago.

I turned 24 three weeks after we started dating. I was working from home on my birthday, and Una surprised me by coming over to my apartment with an indoor picnic—ham and cheese sandwiches, carrot sticks, potato chips, fruit. It wasn’t the most glamorous meal, but it’s a kindness I’ve treasured ever since. In the years that followed, cooking for one another has been an essential cornerstone of how we express mutual care, from wrapping breakfast burritos for tailgates to taking over dinner duties during an exhausting work week. Seeing and demonstrating where this relationship between care and cooking came from, through her family, has encouraged me to appreciate it even more.

I’ll pick up oats and condensed milk during a grocery run, and won’t tell Una what I’m doing. The next morning, while she plays Breath of the Wild on the couch, I get to work. I use Adelaida’s method of measuring with coffee mugs and pots. I mess up the order but still follow my gut when determining when to add the milk and the cinnamon. Our kitchen has mostly smelled like holiday exhaust and clogged sink, but today it smells like refuge, like a slow and honeyed weekend morning, an Otis Redding song. It smells like your nonna-bubbe-abuela-oba is here, and things are going to be okay because she is going to take care of you. I am heavy-handed with the cinnamon. I serve it to Una beaming, a child presenting artwork for the fridge.

I know instantly some things aren’t right. The ratios feel off. The oats at the bottom of the pot burn and form a stubborn crust. There’s no way this is as good as Adelaida’s and I’m a bit ashamed at my own hubris, to think I could master her deftness, her muscle memory, of decades of cooking for five kids and two grandkids, even on something as simple as oatmeal, so quickly. She devours the bowl while slaying giant lizards and goblins on the screen before I have time to look at her for validation. She offers a warm smile, one I can see the edges of Adelaida in, and nestles in close to me when she’s done. If it’s not quite right, she won’t tell me. The warmth sticking to our ribs, filling our senses, from one another, is more than enough.

Lindsay Eanet (@lindsayeanet) is a Chicago-based writer, editor and performer. Her writing has appeared in McSweeney’s, Paste, Howler, Chicago Magazine and others. She is the host & producer of I’ll Be There for You, a biweekly podcast about pop culture and coping. But enough about her, let’s talk about you.

Engagement photos in the historic Los Rios district in California

Raising our children as a two-mom family isn't always easy, but we love it 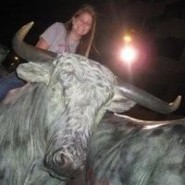