Regina + Lisana: Surprise proposal by the shore in Miami, Florida

Lisana thought they were starting a regular day of work. The Miami, Florida, couple needed to shoot a sales video for their side project. It was business as usual to dress up and schedule a videographer. Little did Lisana know that Regina had planned a surprise proposal.

They started shooting their sales video at South Pointe Park, an urban park with panoramic views of the shoreline. They stood on the rock jetty with the ocean in the background. Lisana was getting a little irritated with Regina, however. Although the couple had memorized scripts for the shoot, Regina could only remember a few lines. But Regina was nervous for other reasons.

In the middle of the shoot, the videographer suggested the pair try something different. The videographer asked the couple to stand back-to-back, then began filming. Lisana turned around and… Regina was on one knee.

“I completely froze,” Lisana told Equally Wed. When she looked up, all of their friends and family were surrounding them. Of course, Lisana said yes.

A few minutes later, a rainbow appeared in the sky.

Regina had planned a luxury yacht ride after with a private chef and a saxophone player to set the mood. The couple spent the rest of the day cruising on the water. Lisana told Equally Wed: “It was the best day of my life!” 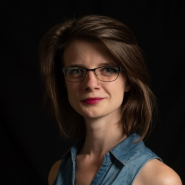