Home > Viewpoints > All Black Lives Matter: the intersectionality of the Black wedding industry and the LGBTQ+ community All Black Lives Matter: the intersectionality of the Black wedding industry and the LGBTQ+ community

June 2, 2020. #blackouttuesday. I call it the day of awakening. The one single day that all industries noticed what largely marginalized and underestimated communities have been saying forever, “We are not included!” While the whole world marched and posted “Black Lives Matter,” the lack of Black and brown people being represented was finally being noticed. Industries, the wedding industry included, were called upon to look in the mirror at their own business practices.

As a Black wedding planner who is also an LGBTQ+ creative, this phase one of “awakening” is amazing and about damn time. It feels amazing to be recognized by everyone in the industry that I have loved for the last 21 years. However there’s a desperate need to examine the next phase of it. Being forced to look at the lack of inclusivity and diversity in the wedding industry during a month when we are focused on pride has a different meaning for me.

My fight for inclusion since 1999 has also included the silent topic no one wants to talk about: the intersectionality of the Black wedding industry and the LGBTQ+ community. We have to understand that based on strong Christian and other religious beliefs, it’s still very hard being LGBTQ+ in the Black community. Just look at the number of deaths in our trans community and the suicide rate of our queer brothers and sisters. It’s evident there’s a long way to go within the Black community.

I remember when I came out to my family; my mother didn’t talk to me for six months. Six months, it was the longest six months of my life. Then I wrote her a letter explaining what I believed being a mother meant. After that things changed and we talked, but it was one subject we didn’t cover and it was OK with me, as long as I had my mother.

You cannot say “Black Lives Matter” without including Black LGBTQ+ lives as well.

Something that has always puzzled me is that in our history as Black people we were ripped from our country and our communities, sold from our families, and forced into a life of slavery. We are still living with the effects this trauma caused and then dealing with the injustices of the police, as well as the lack of inclusion in the world. We are fighting and marching to say, “Our lives matter.” How can we discriminate against someone else? How can we become the oppressor? How can we be OK with knowing that one of the highest rates of un-housed, runaway and suicides are BPOC LGBTQ+ teens? How can we not have the same passion for all our murdered trans sisters? Don’t their lives matter too?

So it’s not a big surprise that you don’t see a lot of BPOC LGBTQ+ weddings being featured. There has to be change and awaking for everyone. I notice when Black wedding publications such as Munaluchi Bride post BPOC LGBTQ+ weddings on Instagram, some of the comments are truly heartbreaking and mean. Even though there are more supporting comments, the hatred shown shows that we have an issue in our community. I remember when California began legally recognizing LGBTQ+ weddings in 2008, the publisher of Munaluchi Bride reached out to me to publish my clients’ wedding. I was surprised and excited that it would appear in the magazine. I thrive to make sure our couples see themselves in magazines.

Last week, I noticed another major Black wedding publication, B Collective, posted on their Instagram an LGBTQ+ couple and it was amazing to see the love. I feel as more Black wedding outlets start to publish LGBTQ+ weddings, there are more opportunities to start having conversations within the Black community. As we start to see more LGBTQ+ celebrations represented perhaps it will encourage our industry to have those conversations about what inclusion truly means. As we see more LGBTQ+ members in the church families, perhaps it will give the Black community the opportunity to get to know just one LGBTQ+ person. I feel once my mother let go of her perceptions of what being gay meant and just focused on being my mother, our relationship grew stronger. I feel that could happen to more people if they were given the chance. 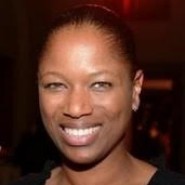 Chanda Daniels is the creative director of Chanda Daniels Planning + Design (www.chandadaniels.com) and founder of A Monique Affair, one of the leading event planning companies in the San Francisco Bay area. Named TOP WEDDING PLANNER OF THE WORLD by HARPER'S BAZAAR, MARTHA STEWART WEDDINGS & BRIDES MAGAZINE. A natural at designing and planning events, Chanda’s years of design experience have established her as an expert in her field. With history as a former catering sales director, Chanda mastered the fundamentals of her craft. Combining these skills with her passion for creating events, she founded A Monique Affair in February 1999 and in 2019 founded Chanda Daniels, Planning + Design with a focus on highly customized fine art wedding weekends. With 22 years of planning and design experience, Chanda has worked with some of the most prestigious venues and creatives in the industry. Chanda is active in planning weddings for the LGBTQ+ community. She continues to hone her design skills by keeping up with industry trends, attending workshops and seminars, and by earning a bachelor of the arts degree in hospitality management from San Francisco State University. Chanda is certified LGBTQ+ inclusive through Equally Wed Pro. A wedding industry veteran, Chanda Daniels combines innovative skill with imagination to bring to life the most daring design ideas. She believes in celebrating milestone events with class, style and richness. Chanda’s weddings have been featured in Equally Wed, H and H Weddings, Martha Stewart Weddings, The Knot, Carats and Cake to name a few. A Monique Affair is a Platinum vendor with Equally Wed. Photo of Chanda Daniels: Sonia Yruel